Another product that will be available on thinkpierce.com in the future is original music presented with a unique twist. Music has been a big part of my life ever since 6th grade when I started playing drums on a practice pad.  But I wouldn’t say it was coincidence.  Since I was in diapers my father has worked as a college music professor and my mother as a private piano teacher.  It would be an understatement to say that I’ve attended my fair share of orchestra and choral concerts.  Those experiences allowed me to learn a unique and valuable skill that few people posses: how to properly read a classical concert program.  The average concert attendee would look at a program that appeared to have 6 songs and think, “oh yeah, I can totally handle this.  Six songs and we’re home free.”  But what I learned the hard way as a young kid was that those six songs are actually six “movements” each packed with an onslaught of “booby trap” songs that keep the concert going on and on for hours!! Ha ha, I joke about it, but those moments helped shape an appreciation for music in my life that continues today. One of my early musical memories was another childhood experience most people could directly relate to; being dressed in a Christmas church robe as part of a headlining act in the yearly church Christmas concert.  That’s where the upper left photo comes in; that’s one of my best friends Daniel Sutliff and I getting ready to put on the Christmas production of a lifetime.  Daniel shared a similar upbringing. We’ve known each other since birth and when our middle school years rolled around, we were both getting in to music at the same time. To this day, I’ve played more music with Daniel than anyone else. One day I ran across this picture and felt a fifteen-year anniversary photo shoot was in order.  Over the years Daniel had amassed a collection of various amps, and in my mind it was the perfect backdrop for a couple of modern day red bow rockers.  I  doctored up two bed sheets from the thrift store and purchased two giant red bows from a lawn and garden store intended for street lamp posts.  A friend brought his camera over and we took care of the rest. Since middle school, Daniel hasn’t let up for one moment and is currently working on releasing two albums.  One of is his solo projects, goes by the name “Daniel(S)” and could be described as inspiring electronic music with live bass and guitar.  Visit the Daniel(S) myspace page here. Another exciting project is the upcoming release of the recently mixed “And There Stand Empires” album, which Daniel plays bass for. Check out Empires myspace page here. Both soon to be released albums represent groundbreaking music that any music lover could appreciate and respect.

Also to come will be a music project currently in the making at the thinkpierce factory.  For now though, I will refrain from sharing specific details.  Until then, brace yourselves for what Daniel(S) and Empires have in store for you in the near future and enjoy these photos that celebrate two friends whose first joint music venture started with a timeless combination of white robes and red bows… 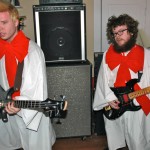 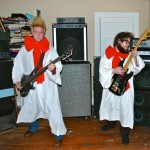 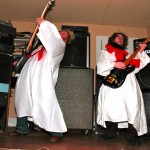