When’s the last time you rented a VHS copy of “The Mask of Zorro” that had a custom totally non-authentic poorly hand drawn cover on it? Well if you frequented the Reasor’s video rental store in Jenks, Oklahoma around 1998 you might be able to say about 13 years ago. That’s about the time Reasor’s video and I teamed up together for an employment experience like no other.  That’s also where I met Justin Vanscoy for the first time. Justin starred in a short film I made about 9 years later, a super unique comedy that touches on such jolting subjects as “snack time”, “nap time”, and “the plans”. That movie is currently on the chopping block and will be offered on www.thinkpierce.com some time next year. But back to our story. If you worked in a Reasor’s video store in 1998, certain things were bound to happen. Every Easter you were going to be encouraged to sell a lot of Peeps, you were going to be pressured by customers to recommend a good movie, and then be held responsible the next day when the customer decided they “hated” it and occasionally customers were going to loose the VHS case and return the video tape without it. Fortunately for Reasor’s video, I managed to come up with a solution for that last one. When a video came back without the cover, I took the initiative to draw a new one. But if I was going to a draw a new cover, that’s what it needed to be: New, with a fresh perspective. Or possibly a completely different one all together. In total, I drew about 5 different VHS covers in Reasor’s video that replaced lost covers on anything from “Rugrats” to “The Mask of Zorro”. The hilarious thing about all this was that my manager at the time actually allowed it and got a kick out it. The other thing that cracked me up was experiencing people bring these ridiculous poorly hand drawn VHS tapes up to the counter for me to rent out to them. I got so many laughs out of people just picking these things up and being like, “What the !$*# is this?”

But VHS tapes don’t last in a rental store forever. Eventually they reach the end of their rental days and get put out for sale in the “bargain bin”. When “The Mask of Zorro” came up for purchase, I knew I had to get it. I wish I had bought all of them. But I guess one is enough to keep the memory alive. It’s so hilarious for me to think about all the different times those crazy looking VHS tapes were rented out. Once one made it back to the customers house, I can imagine a family member picking up the VHS and asking, “What is this?…you rented this from the video store? Uh, what the $%*#?” So here’s a salute to my manager at the time for allowing crazy VHS tapes in her store. Special thanks to photographer Sara Christian. 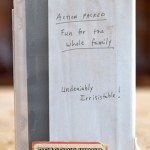