One day it became apparent to me that I had never really given the color lime green the attention it deserved.  That realization birthed an idea for a new Thinkpierce photo shoot like none before.  At the time I was living downtown in a 1-bedroom apartment that rented out monthly for the same cost of most people’s electric bill.  Like many apartments in my price range, I had one of those unspoken agreements with my landlord that any repairs or upkeep in the apartment were up to me, which worked out great.  I lived there for over 6 years and loved it.  An agreement like that meant my apartment wasn’t in the best shape, but it also meant the creative control of the “updates and repairs” were up to me.  This scenario was ideal because it meant that my living room could be transformed in to the location of my new photo shoot idea! I’m always writing down new ideas, which causes me to always have stacks of papers lying around in various places and at the time I tacked them all up on the walls of my apartment.  All I would have to do is clear off one of the walls and I would have the blank slate I needed to create my new lime green world.  As the lime green photo shoot idea bounced around in my head, I happened to notice some green colored Jones Soda in a gas station one day… and without much effort on my part, my first prop had presented itself.

But that was just the beginning, I also had some cinder blocks that had been left behind by the previous apartment tenant, Nathan Gray who was then wrapping up his joint venture comedy show Beef Baloney and about to join the bluegrass band, Grass Crack. When I first moved in to the apartment, I noticed that Nathan had paired the cinder blocks with slats of wood to create a “shelving solution” like no other.  It was quite something and I knew that the “passing on” of the cinder blocks came with great responsibility.  It was up to me to breathe new life in to them and that’s exactly what I planned to do.  Once they were painted lime green and stacked on top of each other, the cinder blocks would make perfect pedestals for the green colored Jones soda bottles.  Next, I needed some type of chair or furniture piece to sit on.  I settled on a coffee table from the thrift store that was just tall enough to do the trick. Now it was time to get to work.  After testing out a few different shades of green from my local Home Depot, I found a winner and got the painting party started.  I don’t know if the next idea was paint fume inspired or not, but I decided it would be cool for smoke to be rising out of the soda bottles in some of the shots.  With some trial and error, I learned that if I broke the bottle at the bottom just enough to allow airflow, I could put a couple sticks of incense inside and create the smoke effect I was looking for.   After I hung three cheap work lights at the top of my new lime green wall, I was ready to roll.  I called up photographer Sarah McElravy who was ironically the little sister of the apartment’s previous tenant Nathan Gray and BLAM! It was photo shoot time!  Thanks to Sarah and the color lime green, we ended up with some really unique shots.  The last photo of the bunch provides a visual storyboard of what it took to create the set of this lime green photo shoot from start to finish.  Enjoy! Special thanks to photographer Sarah McElravy. 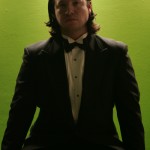 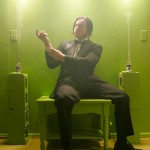 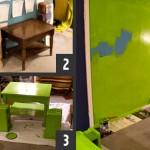