Recently I joined forces with the one and only Garrett Wiendorf to film a scene like no other.  I am in the process of recreating an independent film I made a few years ago and decided I needed to film an extra scene to help with the pacing of the story.  The character I had created in my mind was somewhat of a tech guy who was into “gearing up” with all kinds of electronic devices…but not just any electronic device; old school stuff, like VCRs, Palm pilots, and telephone headsets.  In addition, I decided the character needed to be totally in to “snacks”, having a “sea of snacks” covering his entire bed.  I even nabbed an odd tray furniture piece at the thrift store that set beside him in the bed, acting as somewhat of a “snack trophy table” specifically designed to showcase the “top pick” snacks for easy access. And whom did I want to play the character that this would all center around?  You guessed it, the world famous Garrett Weindorf.  I had seen Garrett perform in his band, Ghosts and he was always so hilarious  on stage between songs.  Two acquaintances of his, Matt Minor and Dennis Pagano had already been in the film so Garrett’s involvement would complete the triforce.  After randomly contacting him on Facebook, days turned in to weeks, then before I knew it, Garrett had strapped on a telephone headset, and was waist deep in a variety of “knock off brand” snacks. I was fortunate to have Andrew Declue as the cameraman, who also allowed me to use his bedroom to shoot the scene in. I had it in my mind that I wanted as many “knock off brand” snacks as I could get.  For the sake of variety though I did end up getting some of the time-tested name brand snacks as well.  To start, I hit all the places one would hope to find “imitation” food: Dollar General, Wharehouse Market, Big Lots, then finished it off at Sam’s and Wal-mart.  In all I spent over $200 bucks in hardcore snacks. Very little of it was actually opened, so I did the only logical thing a gorilla film maker would do who had just bought over $200 in snacks that he only needed for his film shoot…I returned it.  Well, not ALL of it…(I mean if I could have I would have), but I was able to awkwardly return about $130 of it back to the stores I bought it from.  As an aside, when you pull your car back up to a Dollar General store you purchased a bunch of snacks from the day before, you almost have to get in a certain mindset before you grab 7 sacks of snacks out of the back seat and take them in to the store to return them.  Luckily, I have been blessed with that mindset. But enough about snacks, another thing I wanted to focus on in Garrett’s scene was an old school palm pilot.  I had purchased one on amazon.com but a few weeks after I got it, it stopped working. So I turned to Facebook to see who might have an old school palm pilot they wanted to donate to my movie.  I ended up hitting the jackpot when a former co-worker, Haley came to the rescue.  Not only did she have a palm pilot, but in addition she had a keyboard docking station and camera kit that went with it! Incorporating the “palm pilot keyboard docking station” in to the scene was like experiencing an act of fate. It didn’t stop there though, backing up to the beginning of the scene, I had Garrett’s character pull out a VHS copy of one of the first movies I ever made called “Cai Chi”, which he watches on his “Daytron” brand TV throughout the scene.  All together, the entire scene only lasts a couple minutes, but it’s packed with nostalgia and well, lots of snacks. I’m getting very close to releasing this movie and I’m super pumped!  In the mean time, check out Ghost’s MySpace page. They are awesome entertainers that know how to keep you laughing & rocking. If you ever get chance to go to one of their shows, I highly recommend it! Photos by Andrew Declue. 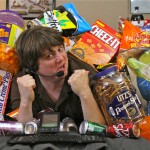