One night I was driving on 11th street near downtown Tulsa when I passed by an awesome display of light glowing through a wall made of glass blocks.  It happened to be a Mazzio’s delivery location, but unlike any I had seen before.  You already know what was about to happen next… a Thinkpierce photo shoot.  As far as I was concerned, it was a psychedelic stage waiting for a performer.  That person happened to be me.  I was working on some new music at the time and figured this would be a great way to shoot some cool promo photos.  I had my idea, now it was time to make it happen.

A photo shoot like this wouldn’t be very exciting with just one person so I called up two friends who both played guitar and asked if they would be up for posing as Thinkpierce rockers. One was Dennis Pagano and the other was Matt Minor.  Not only have both of these guys come to my aid in multiple Thinkpierce extravaganzas, both continue to play music to this day.  Dennis is a full time drummer working in casinos, clubs, and cruise ships and Matt Minor plays guitar in the rock band, Ghosts.  Ideally I wanted drums in the set up as well, but I figured the noise might not go over with the store manager of Mazzio’s; whom I still needed to get permission from.  Luckily, it wasn’t too hard.  I walked in one night, explained my idea and he was just kind of like, “Yeah, sure, whatever. That’s cool”.

I called up Marshal Baker to head up the photography and locked it in. Around nine o’clock we all showed up with guitars, mics and amps ready to bring it.  After I let the manager know we were there, we set up shop and got ready to rock.  Marshall started snapping photos as we proceeded to act out a life changing rock show back-lit by a wall of psychedelic light.  In between shots, Marshall switched his camera to video mode (before still camera’s really were video camera’s) and grabbed some action shots of us thrashin’ it out. Although unplanned, the footage turned out to be really cool and paired up perfectly with a song I had recorded in my apartment at the time called, “Stay Alive.” Combined together with some other promo footage also shot on 11th street with Jesse Scott a few days later, it created a great promo piece for the upcoming release of Thinkpierce Music, which introduces some new songs from the past.  The video is called “Thinkpierce Music” and is viewable in our videos tab. Since this shoot, that Mazzio’s location was remodeled and although still there, the giant wall of light was reduced down to a 7 by 8 display window. A reminder that when an opportunity presents itself, don’t think it will be there forever! Had a lot of fun with this one, hope you enjoy it. Thinkpierce, something new every Friday. 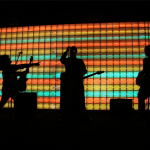 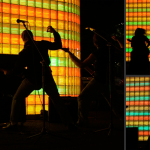 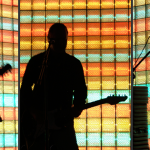 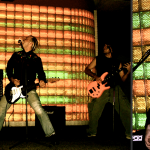 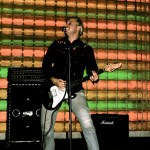 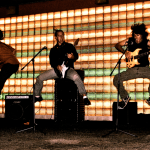 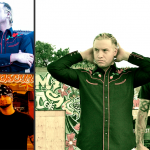 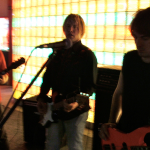