This is your Brain on Thinkpierce Creating some of the motion graphics for an upcoming independent film recently became a group activity. You might not be surprised to learn that all had to do with a crazy dream sequence. The task called for some odd requests involving animated brains. To have the brains created from scratch, there was only one person to call…Josh.  And to have them animated on screen, there was also only one person to contact…Josh. The two Josh’s I’m talking about here are professional artist Josh Dunbar and Professional Editor Josh Mitchell.  The goal was to create an animated brain that would show up in the characters heads, pulsate and then flash into a bright light. This sequence would allow viewers to understand the transition from the real world in to the dream world in the scene. I started by contacting professional artist Josh Dunbar to create the individual brains. I provided him with screen shots of the different angles and explained the end goal. Josh did an awesome job selecting the colors and style I was hoping for and provided me with some awesome brains to work with.  Next I used photo shop to crop out the section I needed from each brain. Once I completed the final edits for each scene, it was time to contact Josh Mitchell for the animation.  Josh and I sat down in front of his Macbook and let the good times roll.  He added a glowing effect to the brain images and caused them to move around on screen so that it looked like they were a part of the characters heads.

In the end both Josh’s rocked it out of the park I’m really excited about the result.  There is additional motion work that I am in the process of completing but with the “brain animation” now finished, I’m much closer to finishing the movie. This film has truly been a labor love, a project that has been both my friend and my enemy, ha ha. When it is completed, I have an army of special feature footage that I will be unleashing to help promote it. So buckle up and let Thinkpierce take you for a wild ride around the block: Something new every Friday! 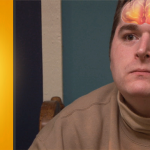 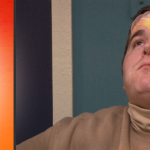