Hot dogs at the dump

It was the Saturday morning event I had been looking forward to all month, a special gathering where the guys and I could just relax over a meal straight off the grill. After slicking back my hair with Palmolive, I ran over my checklist to make sure everything was packed for the big outing. Hot dogs; check, egg crates; loaded, party grill; packed, hair combed; done, ironed shirt and crimped dress slacks; ready. Yep, I was ready. I thundered up my limited edition Grand Marquee, and swooped up Paul and Spencer. You know how a huge 4 door family car looks when it’s being pushed to its limit taking the type of extreme turns that cause the weight of the vehicle to grind on the street? Well, if you do, then you know exactly what it would have been like to see me behind the wheel that day. Words can’t describe how special it was for us all to be road raging again, heading to our favorite stomping grounds. We cranked the stereo and stuck our heads out the car windows, screaming with excitement just like in the movies when characters are “acting crazy on a cool road trip with their friends”.

Finally we pulled in to the city dump entrance. We drove up on to the scale to get weighed, put on our dark sunglasses and played it cool as we waited for the green light to signal us forward. A few tense moments passed then finally the light granted us access, “Score!” we all murmured under our breaths. Even though the only reason for the delay was because the landfill attendant was distracted from the TV show he was watching, it still always made us feel like we had just “sneaked” by a gate guard in an undercover operation. Once the land fills mobile office was in our rear-view, we put pedal to metal, ripping and roaring up the dirt road leaving a tornado of dust behind us. Was that additional act of road rage really necessary? No, but boy did it feel great. Once we made it to the top, the excitement set in as I realized we were about to partake in our monthly “guys afternoon out” ritual: a business casual, grilled lunch on egg crates at our favorite landfill. I brought the vehicle to a screeching halt creating the type dust storm that only one vehicle could create; you guessed it, my limited edition Grand Marquee. We grabbed some ballpark franks and fired up the grill. This was our moment to relax, kick back on an egg crate and just be ourselves. Sure there was the occasional trash truck that always seemed to intentionally prolong the dumping of the load just to annoy us. Or the homeowner with a truck full of left over garage sale items that gave us a pretty intense stare down. But we had learned that if we were going to hold our gatherings at the city land fill, then those were just things we were going to have to deal with. But the truth is, even with the occasional distractions we always got plenty of time up there to chow down on a great grilled ballpark frank and have some great conversations. Some people might say one man’s trash is another man’s treasure, but in our experience one mountain of trash has been another man’s treasured gathering place to eat a great hot dog with a couple of friends. Thinkpierce! Something New Every Friday. 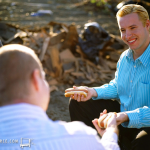 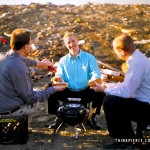