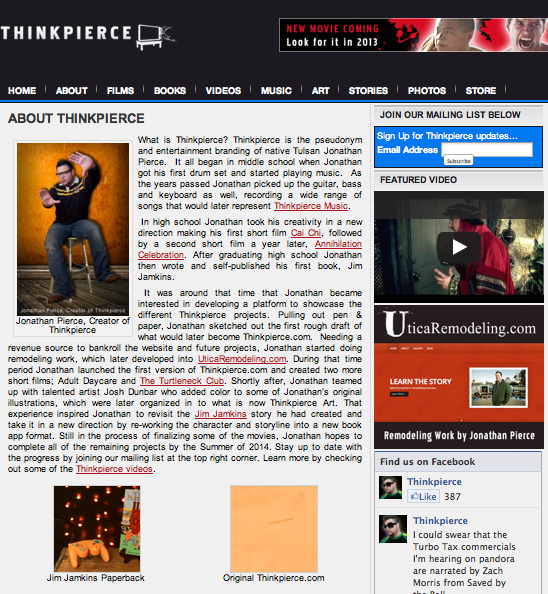 Well, it’s about time for a new “About” page.  This past week I’ve updated the Thinkpierce About page, which takes another step forward in streamlining what Thinkpierce is all about.  It also provides links to 4 new landing pages we’ve created for each of the Thinkpierce Films.   One thing we have learned is that offering each film in the form of a movie app for both Apple and Android devices has taken a lot more time than we thought! The release of the first movie app, Annihilation Celebration, was delayed last year after we made a decision to discontinue our relationship with the programmer at the time and start again from scratch.  In the end it ended up being a better fit for us to manage the development of the app ourselves. Using the “puzzle pieces” of the app I had already created, my talented wife Rhona has been managing the build of the app with a new programming team and we just received the first fully functional apple version this week! This process has taught me not to give out concrete release dates, ha ha, but at this point we are anticipating the release of both the Apple and Android version of the app to be sometime in April 2013. Until then, take a look at the updated About page which shares a few more inside scoops about Thinkpierce.com. Thinkpierce, Something New Every Friday!