Being an outgoing person, it has not been uncommon throughout my life to be asked: “Where do you get this energy? Have you always been this way?”  What exactly is meant by the words “this way” remains unclear, but for anyone who has ever wondered whether I was outgoing as a kid, this video has the answer: Yes I was.  Thinkpierce wishes you a very Merry Christmas.

If there were one facet of Thinkpierce that best represented who we are and what we do, it would be Thinkpierce TV.   My dad say’s it best in saying that if there was something happening in my life, I was somehow getting it on video.  As a result, I’ve built up a large collection of VHS tapes, DV tapes, hi-8 tapes, and DVD’s loaded with footage that included anything from live performances, sketch comedy, scenes of unfinished films, music, break dancing, to total randomness. In 2010, I focused on converting it all in to my computer and after countless hours of capturing and logging footage I now have it all organized in hard drives under a folder that could only be named one thing; Thinkpierce TV. END_OF_DOCUMENT_TOKEN_TO_BE_REPLACED

It’s not easy to be an informant in the medieval realm of Thinkpierce, but someone’s got to do it.  That was the job of Jeff Phillips who played the role of Sidias in the newest short film from Thinkpierce titled: The Informant.  The whole idea started with me thinking it would be funny for two guys dressed up in medieval robes to be engaged in a ridiculous conversation between a cracked door.  It later evolved into a cast of four and included barbecue turkey legs, a beheading and ridiculous medieval attire.  END_OF_DOCUMENT_TOKEN_TO_BE_REPLACED

This week we’re rolling out a very exciting part of thinkpierce.com… The Video tab!!  The Thinkpierce crew and I have been hard at work, creating some really great videos to entertain you.  One of which will help promote the new Thinkpierce T-shirt!!  Get ready for some unique new videos headed your way in the near future.  Until then, enjoy a one-minute video I put together that promotes our weekly e-mail list and gives you a sneak peak at a brand new Thinkpierce Commercial!  Click on the new Video tab above to view it. 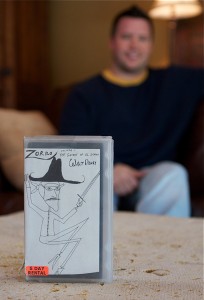 When’s the last time you rented a VHS copy of “The Mask of Zorro” that had a custom totally non-authentic poorly hand drawn cover on it? Well if you frequented the Reasor’s video rental store in Jenks, Oklahoma around 1998 you might be able to say about 13 years ago. That’s about the time Reasor’s video and I teamed up together for an employment experience like no other.  That’s also where I met Justin Vanscoy for the first time. Justin starred in a short film I made about 9 years later, a super unique comedy that touches on such jolting subjects as “snack time”, “nap time”, and “the plans”. That movie is currently on the chopping block and will be offered on www.thinkpierce.com some time next year. END_OF_DOCUMENT_TOKEN_TO_BE_REPLACED

How does raw video footage of a house remodel end up being edited in to a music video? That’s what this week’s post is all about…  During my remodeling days I made sure to keep an ongoing portfolio of my remodeling jobs to be able to show future clients examples of my work.  My main medium of choice to do that?  Video of course.  That’s where James Plumlee came in.  I first knew about James from my middle school “punk rock” days.  My friends and I would go to shows and see his band “Good” perform at local venues.  Years later James joined forces with my friend Daniel Sutliff to form the band “And There Stand Empires“, a four member band that blends two bass guitars with drums, distortion, keyboards and xylophones.  I learned through Daniel that James did great video work, and that’s when James received my call.  Over the past few years, James has shot a wide variety of projects for me mostly remodeling related. END_OF_DOCUMENT_TOKEN_TO_BE_REPLACED